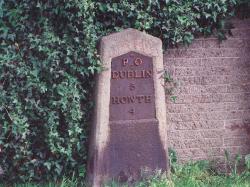 Where is Raheny? Raheny is an extensive coastal suburb of the city of Dublin in Ireland, centred around an old country village. It lies four to over five miles (6.5 to over 8 km) from the city centre on a (north) easterly main road, the Howth Road, which goes to the historic Hill of Howth (Binn Eadair), at the northern end of Dublin Bay, some miles beyond. The latitude is 53°23' North and the longitude 6°10' West.

The bulk of Raheny lies somewhat above sea-level - the original village was on a crest of land, and there are small bluffs coastwards of Maywood and "old Bettyglen" - and the lands slope down to the sea from the village centre towards Bull Island, and also, after a long run of Howth Road on the level, at Blackbanks, where it meets the equally ancient district of Kilbarrack. There are a variety of soil types, with sand at the coast and heavy clay underlying much of the area. At one time, there were limestone quarries in Raheny. The area has a number of rivers and streams. In the centre of the village is the Santry River, which washed the sides of the old fort from which the district takes its name. It runs in the open through most of Raheny and enters the sea (the "lagoon" between Bull Island and the coast, also known as Crab Water and Raheny Lake) beside the causeway to Bull Island. The other waterways include the Naniken, now mostly culverted, which travels through St. Anne's Park and enters the sea from there, and the Blackwater and Fox Streams (see features).

How to get here? Approaching from the city centre, you pass through North Strand and Fairview. At Fairview, you can proceed along the old Howth Road, through Clontarf and Killester, reaching, at the cityside beginning of Raheny, the crossroads where four districts meet (Clontarf, Raheny, Killester and Artane). The road then goes through the centre of Raheny and joins with the coastal route, which runs from Fairview to Raheny via coastal Clontarf. Leaving Raheny in the direction of Howth, you enter Kilbarrack, pass Bayside, touch Baldoyle and pass through Sutton.

By road, Raheny is accessible from the Howth Road and from the James Larkin Road (the "coast road") from the north side of Dublin city centre (for those approaching from the south east, the East Link toll bridge can help bypass the city centre proper and brings the motorist onto the coast road). The area can also be reached via the city's near-complete ring road, the M50, which terminates a couple of miles away (exit at the N32, or Coolock Junction or at Collins Avenue), enabling those coming from the south, west and north to avoid the city proper.

Raheny is only a moderate drive from the airport and is within around five miles of Dublin Ferryport. The former Dún Laoghaire Ferryport is farther but cars from there could make their way along the southside coast road, crossing by East Link toll bridge or through the city centre.

Public transport The district is served by several bus routes (including Dublin Bus's 29A, 31, 31A, 32; there was previously also the 105 Malahide-DCU special). Two routes, 29 and 31, form part of the Nitelink service. The railway station is chiefly served by the city's coastal electric system, the main element of the DART, which also includes other suburban systems (change at Connolly Station for Maynooth line; change by bus to Heuston for Kildare line) and links to Intercity (Connolly for northern and most western services, including Maynooth; Heuston for all other lines, including Kildare). Raheny's old station building, not currently in use, is listed. Raheny also has its own taxi rank right in the village centre and there are a number of local taxi and hackney drivers and services.